Air Traffic Controllers help insure the nation's commercial, private, and governmental air traffic is able to travel safely and efficiently throughout American civil air space. The work is challenging and demands a great deal of physical and mental focus, however; it is rewarded with higher than average pay and a high level of reported job satisfaction.

What Is an Air Traffic Controller? Is There a Demand for Air Traffic Controllers? The number of air traffic controller jobs has declined in recent years as a consequence of a long-term decline in overall air travel. The Bureau of Labor Statistics (BLS) projects an average growth rate of 4% through 2026, which equates to approximately 2,400 air traffic controller jobs available nationwide each year. These statistics are far lower than the average growth rate for all other occupations.

Those seeking a career as an Air Traffic Control Specialist should expect competition to be fierce; however, the minimum requirements needed to qualify for an air traffic control position are notoriously challenging and often shrink the large pool of initial competitors significantly early in the onboarding process. The FAA reported a completion rate of just over 60% for new hires enrolled in the FAA Training Academy in 2017.

It is also worth noting that while the U.S. median growth rate of 4% for Air Traffic Controller Specialists was below average compared to other industries, there were at least five states reporting growth rates twice as high. Federal reports for 2017 showed a total of eleven states with an above average demand for air traffic controllers. In this section we will dive deeper into the basic requirements that applicants must possess to pursue a career as an air traffic control specialist. We will also look at the different types of air traffic controllers, the average compensation, and the tasks that Air Traffic Controller Specialists regularly perform. Air Traffic Controller Specialists are a part of the National Airspace System (NAS). The broad NAS network fulfills its mission of ensuring the safety and efficiency of commercial, private, and governmental air travel by coordinating several specialized types of air traffic controller specialists in different key roles and in different locations across the United States. The various types of controllers each handle different stages of a flight. Learn more about each type in the summaries below.

A Terminal Approach Controller is responsible for all aircraft within the airspace of a specific airport. Using radar, Terminal Approach Controllers monitor the flight paths of aircraft in flight to ensure that a safe distance is maintained between aircraft. They obtain authorization and grant permissions for aircraft to enter controlled or restricted airspace, approve landings and departures, and perform hand-off protocols to transfer control of aircraft exiting the airport's airspace.

Terminal Approach Controllers perform their duties using the latest radar technology, which is able to provide the controller with up to the minute data on weather conditions, critical events, and other aircraft in flight. Any pertinent information can then be relayed to pilots and flight paths may be adjusted as needed to avert any potential danger. The Terminal Approach Controller and radar equipment operate from specialized towers known as Terminal Radar Approach Control Centers (TRACONs) which control airspace between 2 and 50 miles from the airport, and at altitudes up to approximately 17,000 feet.

A Tower Local Controller is responsible for the coordination of all ground vehicles and aircraft on the runway or operating elsewhere on the airport's grounds. They provide clearance for aircraft to take-off and land, review filed flight plans, and adjust flight paths as needed to avoid any potential safety issues. They are the pilot's point of contact and responsible to communicate any path or runway changes required, adverse weather conditions, delays, holding patterns or any other information that may affect a plane's arrival or departure.

Tower Local Controllers perform their duties from a control tower overlooking the aircraft and ground vehicles they manage. They are responsible for the ground and airspace up to 30 miles out from the airport.

he individual control towers are responsible for a pre-defined airspace based on the geography and air traffic patterns in the area. They monitor all aircraft within their assigned airspace and change flight paths as needed to avoid obstacles and other aircraft. En route Controllers are responsible for aircraft during the bulk of the plane's flight time, handing off to a Terminal Approach Controller as an aircraft nears its destination.

Air Traffic Control Systems Command Center Controllers are responsible for all aircraft in national airspace. They are primarily watching for potential bottlenecks and coordinating the flight path changes to avoid them. The adjusted plans are then communicated to the En Route Controller so that they may in turn communicate the new path to the affected pilots. The overarching purpose of the Air Traffic Command Center Controller is to maintain a smooth and manageable flow of airline traffic for the airports and the En Route Controllers. Any person interested in pursuing a career as an Air Traffic Controller Specialist will need to meet the following minimum requirements to be considered for training and possible employment. The list below details the path options available to satisfy the minimum education and/or experience requirements. Applicants must have completed one of the following choices. If an applicant has satisfied the above criteria, they may be given a conditional offer of employment with permanent employment contingent on the successful completion of all the following. Applicants who have completed the requirements and been accepted for enrollment in the FAA Training Academy are considered new hires and are compensated at a rate of approximately $17,000 annually (as of 2018) while attending the academy.

Academy trainees who score a passing score of at least 70% on the final exam are then assigned to an air traffic control facility as Developmental Controllers. Developmental Controllers are initially tasked with supplying pilots with basic flight and airport info while gaining on-the-job training. As their training progresses they will be given progressively increasing responsibility and pay increases.

New hires remain Developmental Controllers until they have met all training objectives and are able to pass the examination to become Certified Air Traffic Controller Specialists.

The pay rate for Certified Air Traffic Controller Specialists varies depending on the specific location. However, the U.S. median pay rate in 2017 was just under $60 per hour or about $124,500 annually. The Air Traffic Controller Specialist role is a challenging and competitive career path that requires a high level of discipline, determination, and patience combined with nerves of steel and the ability to solve complex and fluid problems quickly. Those that possess these qualities and are able to meet the strict hiring criteria are rewarded with a high-paying career and a generous Federal benefits package. For those with the necessary combination of skills and knowledge to be an Air Traffic Controller Specialist the opportunities are theirs for the taking. 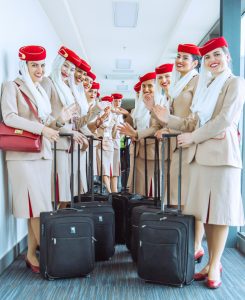 The career of a flight attendant can be exciting, adventurous, and full of interactions with new and interesting people from all over the world. If you are someone who finds it hard to commit to mundane and repetitive tasks at work, or if you have a dream of traveling the world and exploring different cultures, …